Why do I get grumpy when I’m hungry? – and other tough questions kids ask. 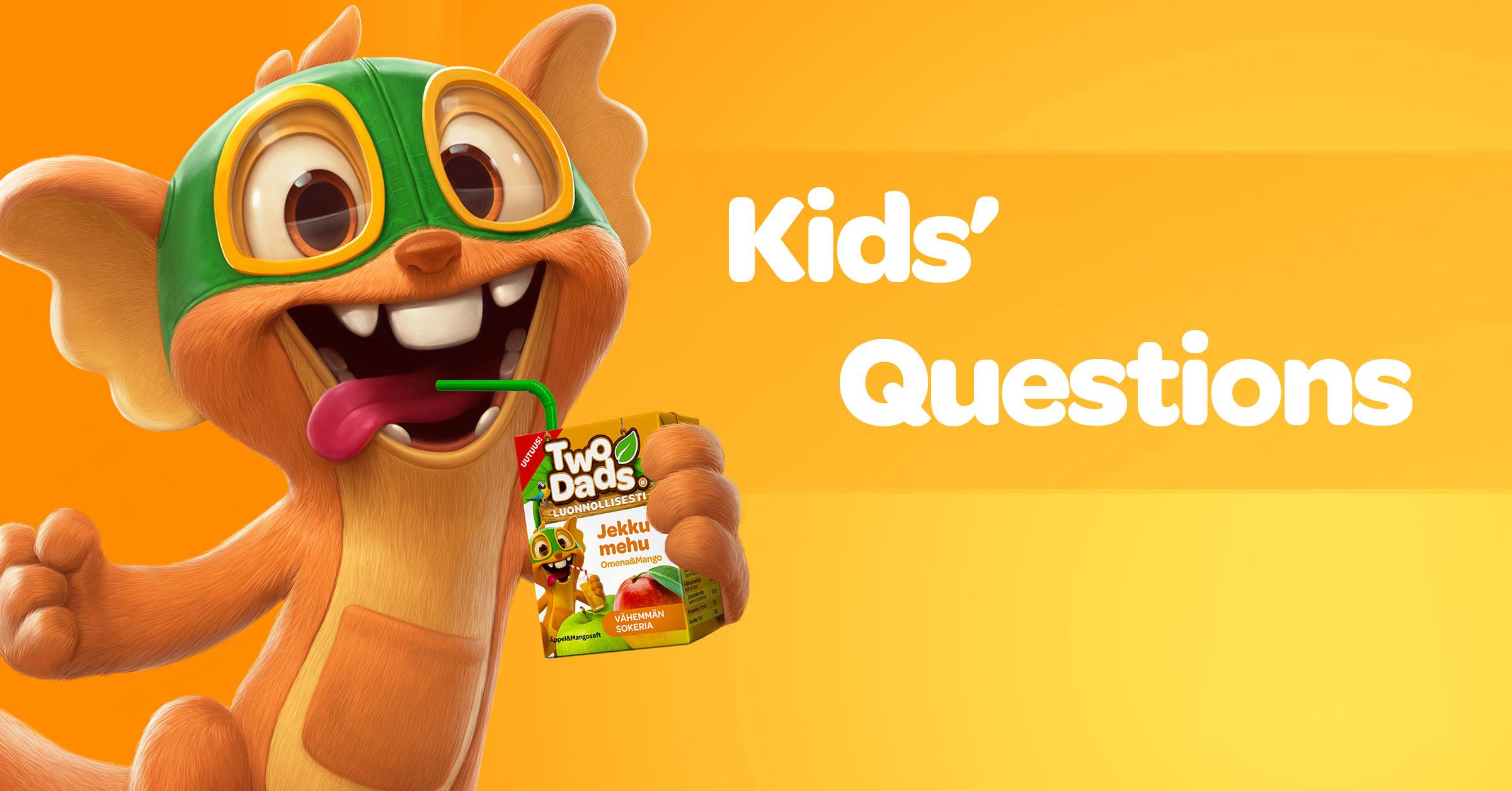 Once upon a time there were two fun-loving fathers, who wanted to give their kids the best foods for them to grow happy, healthy and smart. At the store they were disappointed – they couldn’t find wholesome and delicious foods for kids. Many of the products for kids had unhealthy ingredients that didn’t keep growing kids satiated or didn’t provide good enough nutrition.

The dads decided that the best way to find wholesome nutrition to kids was to start making it themselves. They teamed up with the leading medical doctors in Finland and scientists from Helsinki University to develop wholesome food for kids. At the same time, they could solve some of the exiting mysteries and the answers to many tough questions that kids asked. Like: why my stomach makes grumbling sounds and why do I get grumpy when I’m hungry!

Why Does My Tummy Grumble?

Your tummy grumbles for two different reasons. Either it grumbles when it´s happy after a good meal or drink. Or it’s grumbling because it’s trying to tell you it’s time to have a meal. The sounds are coming from your small intestine where food is being broken down and moved forward.

In short: Grumbling sounds mean that either your tummy is happy, hungry or there is a large fart on its way. In any case it’s a normal and healthy if your stomach grumbles.

Why Shouldn’t We Gobble Up Our Meals?

Wolfing down or to gobble up your food can be surprisingly bad for you. Already when you put food in your mouth, your body starts to prepare to digest food – even before you have finished chewing it.

Chewing your food without hurry activates the hormonal system in your body. The small intestine starts to secrete chemicals (hormones) that start to tell your brain that you are starting to feel satiated or less hungry.

If you eat your food quickly the feeling of hunger does not have time to go and you end up eating more than a person that eats slowly. So, eating your meal quickly increases your risk of obesity and other related illnesses.

That’s why you should chew your food slowly and enjoy your food you will be healthier because of it!

Why Do I Get Grumpy Hungry?

Have you noticed that when some time has passed from your previous meal and you start to feel really hungry, it’s really difficult to focus on anything you might get angry about small stuff, which would not annoy you normally?

It happens because our brains rely on glucose (sugar) in our blood stream. All other organs can use alternative sources for energy such as fatty acids – but our brains can only use sugar.

Therefore, when we increase the time between meals and our blood sugar levels decrease, our body starts to protect the brain by excreting chemicals named hormones. These hormones direct our liver and kidneys to produce more sugars. Part of the hormones secreted are also stress hormones that all animals secrete when they are in danger and produce fight or flight from a predator.

That is why also we humans can get grumpy as the stress hormone levels increase in our blood and enters our brain. The best way to avoid crankiness when we are hungry is to eat regularly and add vegetables and whole-wheat products in our diet to level out the absorption of sugar from our food and beverages into our blood stream.

This is also how we can avoid spikes in our insulin levels and sudden dropping of glucose levels in our blood.  Another great way is to eat first and argue after, so that the arguments can even be forgotten in best case…

Why cant’s everyone eat everything?

Some of us are sensitive to some food stuffs. For those of us our who’s bodies are not able to process some food ingredients such as nuts or wheat. They can get eczema or other unpleasant symptoms.  This is called hypersensitivity.

For some hypersensitivity can be severe and cause life-threatening symptoms.
In some cases, our bodies can be taught to like problematic foodstuffs. This is called desensitization.

In some cases, the body does not have the ability to process some foodstuffs such as milk. This is called intolerance.

Part of us also experience the taste of some foods differently than others. For some food flavors taste very strong or even yucky. Those of us tend to avoid eating bad tasting foods. For example, some people like the herb cilantro (also known as coriander) but others experience the taste to be soap-like.

There are those of us have believes, convictions, religions or cultural preferences that makes them avoid eating some foods. It doesn’t mean that they can’t eat certain foods, but rather that they choose not to eat them.

For example, some people have believed or are part of a cultural groups that allow them only to eat only plant based food and no meat. Some even avoid all animal derived products such as milk or cheese. There are also people that believe that for example. The cow is a sacred animal and therefore cows are not be slaughtered for food.  Some of us find cats and dogs delicious and have no issues about cooking and eating them. Others don’t want to consume meat because growing livestock has a bad impact on our environment. There are many different kinds of people on this planet who eat in many different ways.

In some cases, the body does not have the ability to process some foodstuffs such as milk. This is called intolerance.

Why Shouldn't We Eat Treats All the Time?

Because it would be really bad for your teeth – sugary treats have too much empty (or bad) calories and also because eating only sweet foods will cause obesity and related problems as adults.

Also if all you eat is treats, soon they will stop tasting like treats. It would not give the same pleasure. A treat means different thing to different people, but usually it’s sweet, fatty and salty treats. Most of us also feel a bit sick after eating too much treats. But if you eat a diverse meal you feel great and energetic.

Nevertheless – Treating yourself occasionally is not dangerous – with moderation of course!

The questions were answered by our own experts: